As has happened so many times in the past, SAPS officials are not aware of the Electronic Communications and Transactions Act (Act 25 of 2002), which stipulates the validity and legality of any official electronic communication if the sender or place of origin can be clearly identified.

(1) In any legal proceedings. the rules of evidence must not be applied so as to deny the admissibility of a message in evidence-

(a) on the mere grounds that it is constituted by a data message; or

(b) if it is the best evidence that the person adducing it could reasonably be expected to obtain, on the grounds that it is not in its original form.

(2) Information in the form of a data message must be given due evidential weight.

(3) In assessing the evidential weight of a data message, regard must be had to-

(a) the reliability of the manner in which the data message was generated, stored or communicated;

(b) the reliability of the manner in which the integrity of the data message was maintained;

(c) the manner in which its originator was identified; and

(d) any other relevant factor.

(4)  A data message made by a person in the ordinary course of business, or a copy or printout of or an extract from such data message certified to be correct by an officer in the service of such person, is on its mere production in any civil, criminal, administrative or disciplinary proceedings under any law, the rules of a self-regulatory organisation or any other law or the common law admissible in evidence against any person and rebuttable proof of the facts contained in such record, copy, printout or extract. (our cursifiction).

The contents of this Section thus confirms that electronic generated documentation are totally legally binding and acceptable, as long as the origin and organisation it orignates from, as well as the document's authenticity can be clearly identified, verified and confirmed.

Due to the cost of registered post, which very frequently is not delivered, all official NHSA written communications and documents are presented to members only via electronic means.

NHSA has from 15 March 2016 affixed a so-called QR Barcode on the right bottom of all electronically generated official NHSA documents, which members are able to download from their Personal Natshoot Member Page (see My NHSA Documents).

The information contained in this QR code confirms the member's membership of NHSA and at the same time confirms the electronic authenticity of the specific official NHSA document.  SAPS (CFR) is officially aware of this NHSA procedure of authentification of all official NHSA documents a member may present for all firearm licence applications (our procedures in this case have been officially communicated to them by three different occasions since March 2016).

QR codes, which are printed on the bottom right side of all of a member's official NHSA documents are member specific, and no two members can have the same QR code printed on their documents.

On dedicated hunter and dedicated sport-person certificates the QR code is only represented by the long alpha-numeric code printed on the bottom right of the certificate (see last two paragraphs of this Newsletter for purposes of authentication).

The system is initiated to firstly assure members of the authenticity of NHSA documents issued in their name.  At the same time, however, it gives authorities the opportunity to check if the electronically generated NHSA documents a person should present for instance when applying for a firearm licence, are authentic NHSA documents and not falsified documentation (as we have had instances of in the past - see Newsletter Vol. 10(10) 23-09-2014).

An Example of a QR code, which is printed on a member's official NHSA documentation is shown below:

An Example of the personal detail which will be captured on the member specific QR code printed on a member's NHSA documentation, and which can be read with a QR scanner, which can be dowloaded from the internet on for instance, a Smart Phone, is shown below (this is the document the scanner will then show on the smart phone): 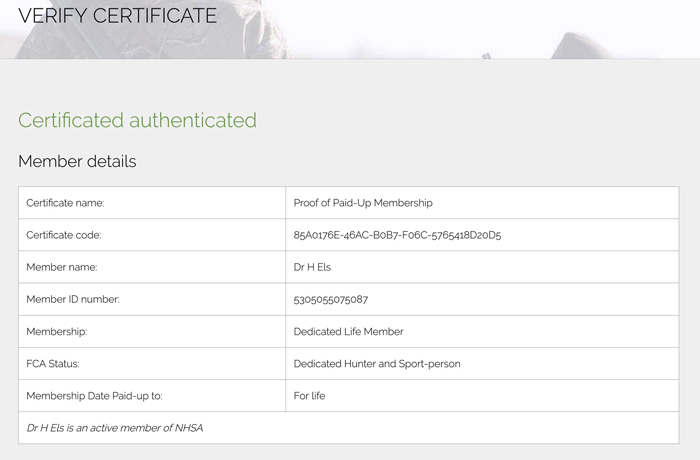 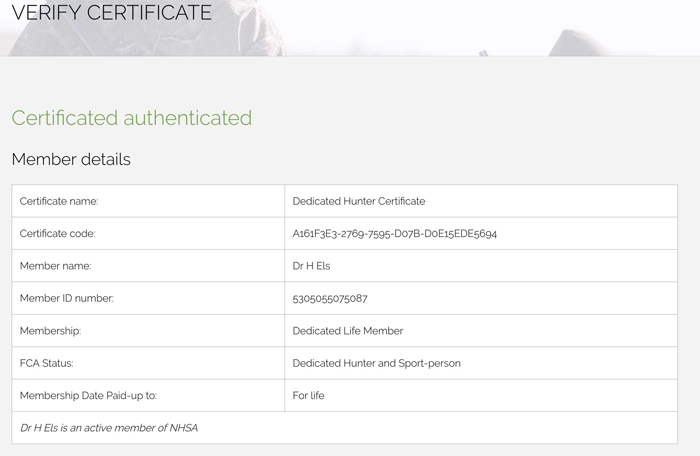 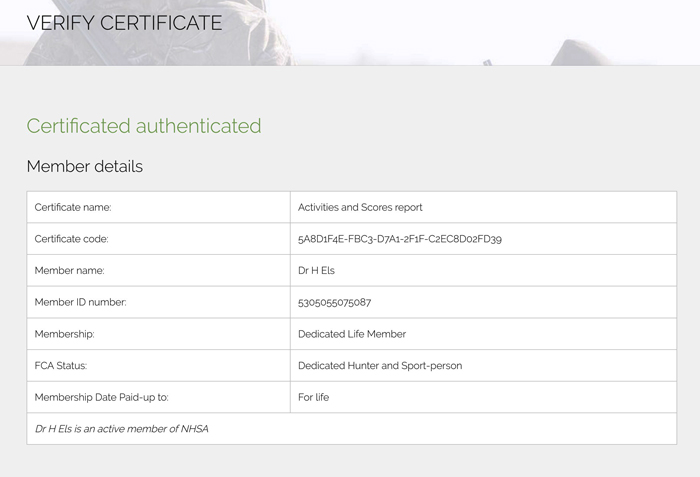 In addition an official NHSA document generation code is printed on a members' official electronically generated NHSA documents.  This is a long alpha-numeric code, which is printed just below the square QR bar code on the right bottom of every NHSA document (i.e. A161F3E3-2769-7595-D07B-D0E15EDE5694).

If a person does not have access to a QR code scanner, one can go to Contact Us on the Natshoot website and then manually enter the long number printed on downloaded official NHSA documents, on the relevant link on the top of that web page (see Top of The Contact Us Web Page on the Natshoot website).  The system will then take one to a verification page which will show the same information as that whch is printed on the Verification Certificate shown above.