Our Members all Conform to High Personal Ethical Standards in Hunting and in Sport Shooting.

We Stand for an Illegal Guns-Free South Africa. For the Safe and Responsible Use of Legally Owned Firearms. 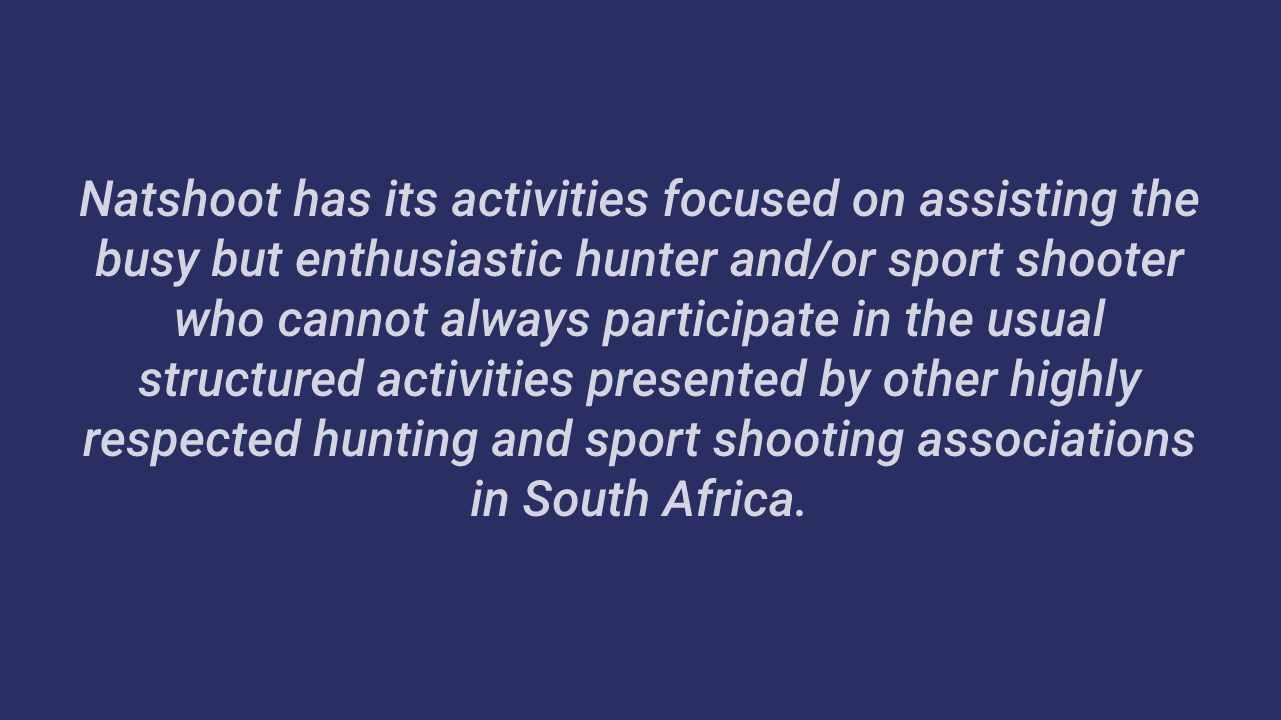 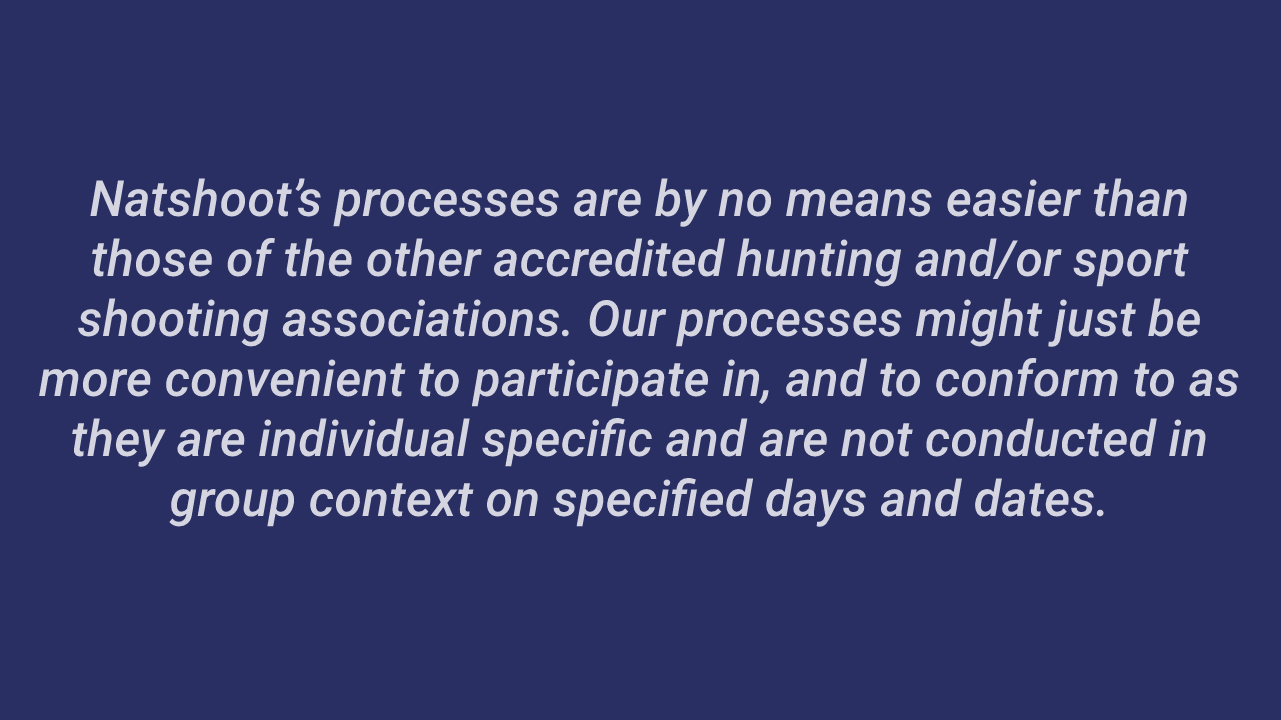 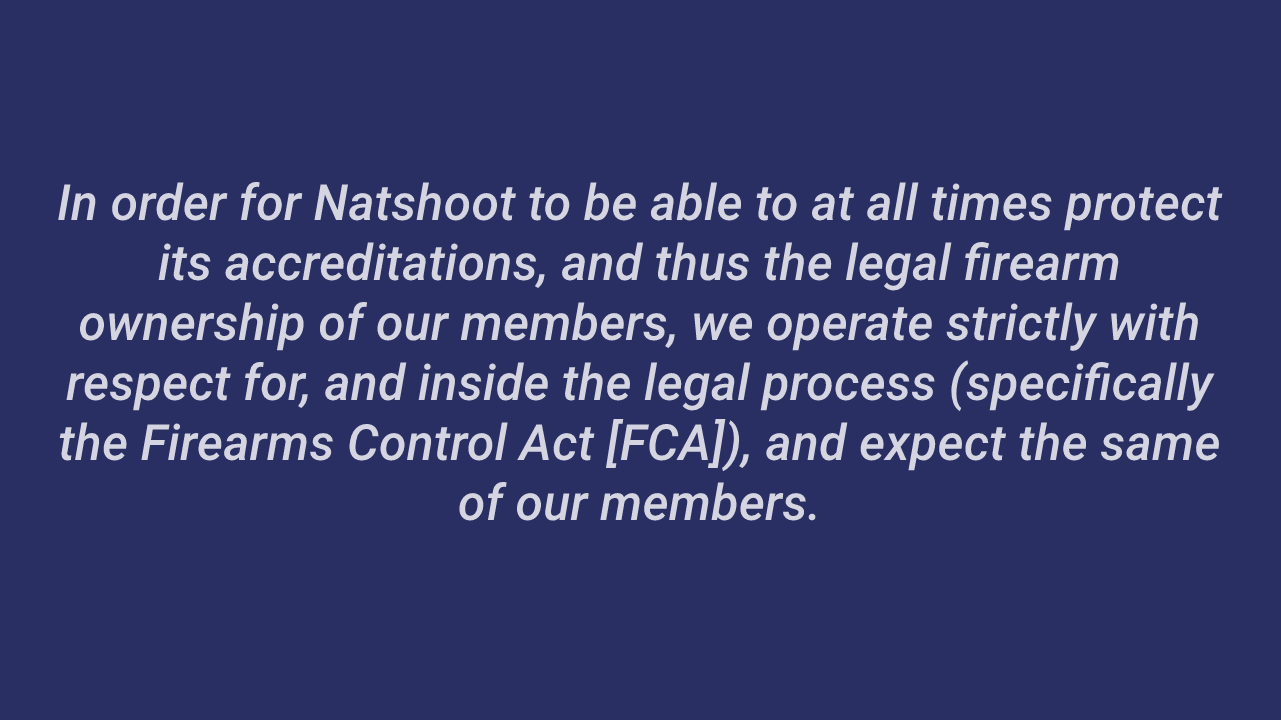 • Members are at all times in charge of all aspects related to their personal legal ownership and use of their firearms as their contact with NHSA is direct and personal (be that in respect of their hunting needs or of their leisure sport shooting needs).

• As we strictly communicate electronically with our members (we cannot handle or work with paper at all), our administrative processes are much faster (our turnaround time is 48 hours for any transaction - normal working days).

• Because we refuse to communicate with our members through third parties as is prescribed by the stipulations of the so-called PoPI Act (Act 4 of 2013) re privacy of individuals, our relationship with our members is personal and direct, and specifically focused on our specific members’ needs.

• Members have direct and 24/7 access to their continuously updated NHSA documentation on their Member Portal. Members also have the continued administrative and legal advisory support of Natshoot at all times.

• In the event that members need direct legal support, our legal advisor who is on the forefront of legal issues pertaining the FCA, is always to your service at reasonable professional rates should legal action need to be taken, or our members can always contact Legally Armed, with who we have a mutual agreement and who are always more than willing to assist our members. We are only an Email or a telephone call away - members may contact us whenever they need to - Contact Us

• We are individual orientated which means our members are in person responsible for everything regarding their firearms and their hunting and/or sport shooting activities, as we do not have Branches like some of the respected other accredited hunting and/or sport shooting associations in this country, where at least some responsibility is taken in name of the member.

• Our members must also enter all their postal target shooting scores and their activities themselves on their Personal Natshoot Member Portal. This in order keep the cost structure as low as it is.

• By joining the NHSA, you join a South Africa-based association of firearm owners, which is apolitical, non-racist and non-sexist, while internationally linked and nationally accredited as hunting and as sport shooting association.

• NHSA-people are responsible citizens who comply with the stipulations of the Firearms Control Act (Act 60 of 2000 as amended) (FCA) and who want to ascertain the maintenance of the right to possess firearms and use of same in a responsible and accountable manner.

• Membership of a SAPS accredited hunting or sport shooting association is not a requirement of the FCA in order to legally own up to 4 firearms in South Africa. It is however, very clear that membership of such an association is to the advantage of any person who applies for a firearm licence - whether you are a “one-gun-owner” or have a number of firearms.

• Membership of an accredited association further implies that you are serious about hunting and/or sport shooting, and about firearm ownership in general, and that you take time to practice the use of your firearms. It also says that the individual is probably more safe and responsible around firearms than an individual who merely holds his/her firearm in a safe for possible use on one occasion.

If you cannot be reached electronically via your own Email-address, it is unethical of us to take your fees for membership as we cannot
communicate with you in other way. If members persist to work with us through third parties, those members must know that we take NO responsibility for any kind of guaranteed service provided as we would normally render towards our members we have direct contact with.