From 15 March 2016 a so-called QR Barcode will be affixed to all electronically generated official NHSA documents members are able to download from their Personal Natshoot Web Pages.

QR codes to be printed on all of a member's official NHSA documents are member specific, and no two members can have the same QR code printed on their documents.

The system is initiated to firstly assure members of the authenticity of NHSA documents issued in their name.  At the same time, however, it gives authorities the opportunity to check if the electronically generated NHSA documents a person should present for instance when applying for a firearm licence, are authentic NHSA documents and not falsified documentation (as we have had instances of in the past - see Newsletter Vol. 10(10) 23-09-2014)

An Example of a QR code to be printed on a member's official NHSA documentation is shown below:

An Example of the personal detail which will be captured on the member specific QR code to be printed on a member's NHSA documentation, and which can be read with a QR scanner on for instance, a Smart Phone, is shown below (this is the document the scanner will then show on the smart phone): 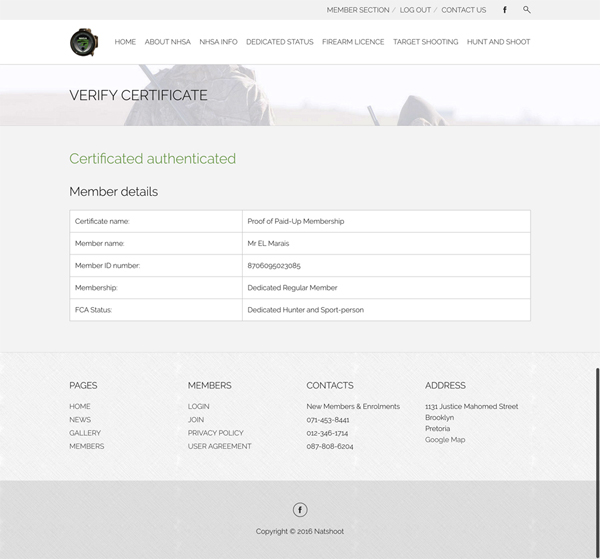 Verification of the authenticity of a specific QR code is a very simple process as a number of QR scanning Apps can be downloaded on any Smart Phone free of charge, and used anywhere and at any time and place (where one has signal ofcoarse).

If a person does not have access to a QR code scanner, one can go to Contact Us on the Natshoot website and then manually enter the long number printed on downloaded official NHSA documents, on the relevant link on that web page.  The system will then take one to a verification page which will show the same information as that whch is printed on the Verification Certificate shown above.