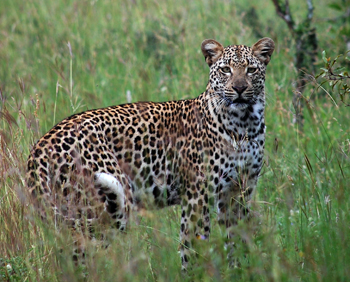 A number of press reports would have informed you of the interim stopping of leopard hunting in the country.

The current stopping of the hunting of leopard is an interim measure of the Department of Environmental Affairs (DEA) and the Scientific Authority of South Africa to be able to make informed decisions re the sustainability of hunting of these animals before they allow the 2016 CITES quota of 150 leopard for our country, to be put into effect

It is clear that the perceived risk profile of the possible “over hunting” of these animals is related to the Scientific Authority of South Africa and DEA having inadequate data on reporting of the hunting of these animals, be that for trophy hunting or in culling as damage causing animals.

Thus not because there is a threat to the survival of the species due to over hunting and because the DEA has now banned leopard hunting as some green-groups would like the issue to be portrayed.

No leopards will thus be allowed to be hunted by either overseas or local hunters until such time as the scientific authority has finalized their research into the matter so as to be able to take informed decisions in future.

In this endeavour DEA, Provincial Nature Conservation Authorities, and the private hunting/hunters sector will participate to as quickly as is possible, but with responsibility, come to a conclusion on the matter.

Permits for hunting of leopard as Damage Causing Animals (DCAs) will still be issued on the merits of each situation as is the current practice in all Provinces.

For those of us who find ourselves in areas where these animals naturally occur, it might seem as if their numbers could not be in doubt.  We believe that the research will show positive results so that the hunting of leopards will continue in 2017 on a scientifically derived at sustainability level.

But be it also be said that it goes to show how important it is for hunters and government bodies alike to keep decent records of all animals hunted per annum.  It seems as if this very important aspect of our nature conservation and environmental management has come short due to a lack of diligence in executing responsibilities in this regard.  None of us want to see species hunted of which the sustainability of the off take cannot be realistically determined. For that we need diligence in reporting and in writing up those reported figures.

Despite the above we are confident that the leopard population in this country is strong enough in number to continue with the current level of off take in a sustainable manner and that the required research findings will clearly show this fact.

As a Hunting Association NHSA shall remain engaged in the process, and will keep members abreast of the outcomes of the deliberations on this issue.