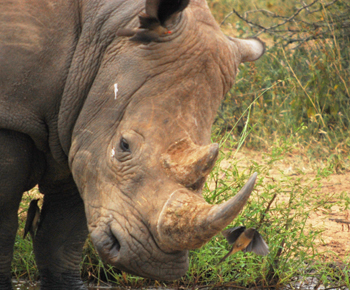 Why the world's largest rhino farmer is cutting off their horns

John Hume, a South African millionaire who wants to 'save the rhino from extinction' Photo: Cornell Tukiri

In the half-light of a South African dawn, the team works quickly, pinning the stricken rhino down and using a hacksaw to remove its horn.

It's a scene familiar across Africa where the creatures have been driven to the point of extinction. Poachers employed by powerful criminal syndicates supplying a voracious Asian market with their horns have reduced their numbers from 65,000 in the 1970s to 26,000 today.

But at Buffalo Dream Ranch, a farm purposefully hidden down a dirt track near the North West province town of Klerksdorp, the aim is to save rather than harm these lumbering prehistoric beasts.

The farm is the world’s biggest captive breeding operation and houses 1,261 rhinos, four per cent of the global population, with a breeding rate of just under 200 a year.

It is owned by John Hume, 73, an eccentric millionaire who made his money from property timeshares and originally bought a handful of rhino along with other wildlife as a hobby.

Mr Hume made headlines when he first dehorned all his rhino after one was killed by a poacher in 2007.

Veterinarian Michelle Otto and Rhino wrangler, Rory Turbitt calm a White Rhino after it has been sedated  Photo: Cornell Tukiri

Today, he is fighting a court battle with the South African government to be allowed to sell the horns he amputates. He argues that if he can feed the demand from Asia with legally-obtained rhino horn, he can slow the illegal trade as well as sustaining his own operation.

“It’s not the demand for rhino horn that’s killing our rhino, it’s the way that demand is currently supplied,” he told The Telegraph this week at his orange-brick home in the heart of his 8,000 hectare farm. “Up until 2008, we had no rhinos being poached in South Africa because demand was being supplied by legal sales from live rhino. Then they banned that trade and those sales were mirrored by rhino poaching deaths in Kruger National Park.”

Since the keratin horn grows back, he said, his rhinos and those of other farmers can produce far more in their lifetime than one slaughtered by poachers ever could.

Conservationists claim that Mr Hume is at best naïve to think such a supply can keep up with demand and at worst greedy, seeking to exploit one of wildlife’s biggest crises to sell his stockpiled horn and become one of the country’s richest men.

He admitted to having five tonnes of rhino horn sitting in bank vaults and harvesting another tonne each year, but angrily rejected the suggestion his motive is to get rich.

A rhino staggers to its feet after being sedated to remove its horns  Photo: Cornell Tukiri

“If I were able to sell, I could maybe just scrape by running my farm,” he said. “I am dehorning them to make them less attractive to poachers but having done that, it’s stupid not to use it to protect them.”

The colourful Mr Hume, who was brought up in the former Rhodesia, now Zimbabwe, said he was unconcerned by the prospect of dealing with criminal syndicates that currently commission the poachers and smuggle wildlife products out of Africa. “I’ll kiss their bums if it means I can save a few more rhino,” he declared with a chuckle.

He is also unconcerned by the prospect of supplying the rhino equivalent of toenails to Asian traditional medicine consumers who believe it can cure ills from cancer to hangovers.

“It’s no worse than what South Africans do to themselves with fast food, tobacco and alcohol,” he said. “They can carve it, snort it, smoke it or poke it for all I care. At least it’s unlikely to do any harm.”

Hume, whose home is littered with rhino statues ranging from lifesize to miniature, revealed that while he micromanages the process he cannot bear to watch the dehorning itself. "I'm a coward," he shrugged, stroking a gimlet-eyed Jack Russell on his lap.

That task falls instead to vet Michelle Otto and a team of farm managers, security guards and workers. Each week, armed with government permits for individual animals, they chase their quarry in pick-up trucks before Otto fells them with one shot to the rear from a tranquiliser gun.

It takes around six minutes before the beast begins to stagger drunkenly, picking up its feet like a dancer. Otto’s team move in with ropes to tie its legs and push it onto its knees.

A blindfold is wrapped around its eyes and socks are stuffed in its ears to dampen the grating sound of blade on horn.

Some go more easily than others. On one occasion Otto and her men wrestled with a cow that was noisily determined not to comply. Others sink to their knees rapidly, trembling slightly as their horn is measured and the chainsaw starts up.

Otto said the trembling was a reaction to the drug, and rhinos “roared like lions” when upset. “If you tread on a cat’s tail it will scream,” she said, gesturing to a prone bull the weight of two Volkwagen Polos. “This animal is quiet. He is showing no sign of distress.”

A White Rhino's horns have been removed by farm managers  Photo: Cornell Tukiri

Ms Otto believes the arguments against rhino farming are clouded by other agendas. “It’s about politics and money, how an NGO gets its funding,” she said. “No one thinks about the rhino. I can tell you they’d gladly sacrifice their horn to stay alive.

“In an ideal world, rhino would be running around as natured intended but this isn’t an ideal world. There is a demand for rhino horn and you can’t change centuries of culture overnight.”

During the five-minute dehorning, other rhinos mill around watching, bearing no obvious ill-intent to the veterinary team who trim each of them every 18 – 24 months.

Ms Otto has been working for Hume since August 2013 and says she has conducted 6,007 procedures, with only one fatality. “It’s always the one they remember,” she said, referring to the farm’s many critics. “She was an old cow and suffered a heart attack.”

She and most of her team chain-smoke however and stand anxiously watching as each rhino wakes and lumbers to its feet. Asked if she worries, Ms Otto replied: “No sh*t. They are my babies. Every full moon I lie awake worrying the poachers will come.”

Because despite the constantly-patrolling security teams, the twice-daily roll calls, the helicopter, infrared sensors and the miles of electric fencing, Hume’s farm has been hit repeatedly by poachers who kill just for the broad stump left behind.

Mr Hume wants to buy radar to scan the farm and do away with his military-style detail. “We are convinced the security teams are our Achilles heel, they were inside jobs,” he said.

Aided by a team of workers the Rhino horns are removed by farm managers  Photo: Cornell Tukiri

If he cannot sell his stockpile to safeguard his farm, he warned, the poaching rates will be far higher. “If I don’t get money to protect my rhino they will be dead,” he said. “What I am doing here is simply not sustainable. I am using my life-savings and it can’t last.”

Such comments prompt howls of outrage in some conservation quarters. Margot Stewart, from charity Rhino SOS, claimed he was “cruel”, “medieval” and “unethical” in an open letter widely shared online.

Others warn legal sales will only create new markets, and point to a one-off sale of elephant ivory in 2008 as whetting an appetite that prompted elephant poaching to then soar.

Carlos Drews, the director of WWF’s Global Species programme, said if South Africa lifted the ban it would go against international principles aimed at curbing all such trade. “It would also make it even harder for already overstretched law enforcement agents to tackle rhino horn trafficking,” he said.

Sophisticated crime syndicates were chameleon by nature and would not simply bow out if their operations were undercut, he added. “Any attempt to flood the market will only result in the syndicates purchasing and stockpiling the horns to regulate the price,” he said.

Mr Hume dismissed the claim of demand being increased by supply as “nonsense”, and said regular auctions would be more effective than once-off sales. He was also scathing about his critics. “Go to the websites of the people who are anti the legal trade and see how quickly you see the ‘donate’ button,” he said.

“I have no problem with demand reduction, if you can get the demand down to zero my horns are worth nothing and my rhinos won’t be poached so I can save R3m a month.”

All he wants, he said, is to make enough money to make rhino breeding sustainable so he can retire and hand his farm to his son.

“It is my life’s ambition to save the rhino from extinction,” he said. “I'm good at making money. If that's all I wanted to do, don't you think I would find an easier way to do it?"