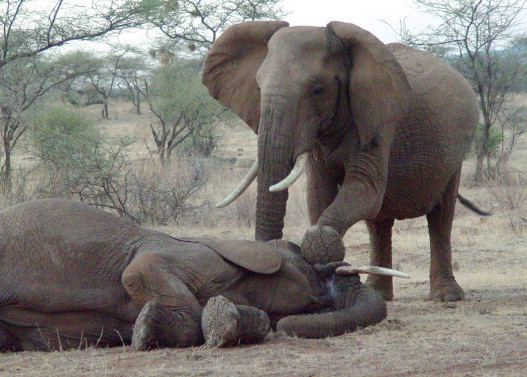 The Journal of African Elephants, in a news release dated 2nd June 2020, under the heading “Botswana Elephant Deaths Mystery Deepens as Toll Rises”.  The report by Mqondisi Dube (Voice of America) states:

GABARONE, BOTSWANA: The mystery surrounding a mass die-off of elephants in Botswana is deepening after initial test results ruled out poisoning and anthrax.

Wildlife officials had earlier ruled out poaching as no ivory had been taken. But Officers have discovered more carcasses as the death toll surpasses 100.

Samples would now be sent to neighbouring South Africa for further tests.

Wildlife officer, Dikamatso Ntshebe, said “more animals could die as some look sickly.  We are still experiencing elephants dying in the Okavango Panhandle,” Ntshebe said. “We also see elephants that show that they are sick and on the verge of dying.  As of Friday, we had a total count of 110 elephant carcasses.

Comment by Ron Thomson, True Green Alliance.  None of this surprises me.  In fact, I have been predicting this was going to happen for many years – but NOBODY in Botswana (or anywhere else) have ever listened to me; even though my observations are all based on sound science-based wildlife management fact and principle; and lots and lots of practical experience.

Botswana, for the last 60 years, has been harbouring a hugely excessive and constantly growing elephant population.  And these “massively too many elephants” – for the last six or seven decades - have caused a huge loss of habitat diversity, an incredible loss of plant biomass and plant species extinctions (more and more every year), a loss of wild animal biomass and a loss of wild animal species. And all this began happening even before1960. Many important food plants have been eaten (by too many elephants) into local extinction.  And I have been pushing all this information into the public domain for the last 30 years. I have written several books about it; and hundreds of magazine articles.  But nobody listens.  The only people whose opinions are ever listened to are the emotional sob-stories put out by the animal rightists – who want nothing less than that ALL elephants should be “saved from extinction” - and the animal rightists haven’t a clue about the principles and practices of science-based wildlife management.

It is now the month of June – and the dying from starvation has started.  There are still five or six months to go before the dry season ends and new rains herald the start of the summer season. If the elephants are dying already - this early in the dry season - I hate to think what the end of October (or early November) is going to be like.

HOPEFULLY, this will be a wake-up call for Botswana. Hopefully government officials will stop listening to these idiotic and devious ‘do-gooder’ animal rightists who think they know everything about elephants – and about everything else, too!  Especially the tourism gurus! The animal rightists say that it is me who ‘thinks he knows everything”. I take no offence at such derision, because I know that I have been in this wildlife management profession for more than 60 years – which is more than the Tourist Jockeys can say. And I have offered Botswana the only possible solution to their dilemma.

So, WHAT IS THE ANSWER?

The solution is to immediately carry out a drastic elephant population reduction exercise by killing 100 000 elephants.  That pro-active management programme would bring the numbers of elephants in the country drastically and dramatically down in the shortest possible time.  And, THEN - next year - to reduce the elephant population still further by 50 percent of next year’s standing crop.  And to continue doing that until the national park authorities have reduced the numbers of elephants to a level that the Botswana habitats can sustainably support.

There IS no other solution!

So, Mr Ntshebe, you can stop sending “samples for testing to South Africa” to find out why your elephants are dying. They are dying from starvation, my friend, pure and simple. So, stop “fiddling” whilst Rome burns!  Botswana has had too many elephants - far, far, too many elephants - for far too long.  So, get your rifles out; get a good management team together; and start killing (harvesting) your surplus elephants. There is no other solution! Better a well-placed bullet delivered humanely through the brain, than let them suffer months and months of agony, withering away with no food, and having to suffer all the miserable consequences that entails.

South Africa must not be complacent.  Due to years and years of gross elephant mis-management in Kruger National Park, we are headed in exactly this same direction.