3.    Members should not doubt that the new amnesty, like the previous one, is focussed on taking in as many firearms with lapsed white licences as will be possible.  That means legal firearm owners are once again in the "firing-line" - criminals do not hand in illegal firearms under any amnesty, unless they cannot be traced.

4.    Members with lapsed white licences can again participate in the new amnesty and apply for a new licence for such a firearm as well as for renewal of a lapsed competency certificate for that type of firearm.  The new amnesty protects a person from prosecution for being in possession of a firearm with a lapsed white licence (but only for the period the amnesty is in place - thus up to 31 January 2021).

5.    The terms (rules) of the new amnesty running from 1 August are the same as those of the previous amnesty which ran from 1 December 2019 to 31 May 2020 - Download Government Gazette with terms for New Amnesty HERE  (take note of police stations which may not accept firearms under the amnesty please - see page 3)

7.    The SAPS Appeal against the interim court order of 27 July 2018, which interim court order protected firearms owners with lapsed white licences from confiscation of such firearms and possible arrest, was on 23 July 2020 upheld by the Supreme Court of Appeals - see Newsletters  Vol. 16(39) in Afrikaans and Vol. 16(40) in English.

8.    People with lapsed white licences, are thus now once again obliged by law to hand in firearms for destruction if the white licence for such a firearm has lapsed (see Constitutional Court Order of 7 June 2018 on constitutionality of sections 24 & 28 of the FCA) (some relief for this harsh situation is in participation in the new amnesty which runs till 31 January 2021).

9.    The legally difficult situation regarding lapsed white licences for which there was a green licence is still interpreted by SAPS as per the National Commissioner's directive of 3 February 2016.  This means that SAPS will interpret white licences which have lapsed, despite there being a green licence for that firearm, as having expired, and that such firearms must be handed in with SAPS for destruction (or to be handled under the rules of the new amnesty).

10.   Until the continuation of the legal validity of all green licences has been confirmed by a court (thus setting aside the administrative ruling of the National Commissioner of 3 February 2016), we cannot give more responsible advice on the practical administrative interpretation of SAPS re the validity of green licences, other than that contained in our Newsletter Vol. 12(17) of 10-03-2016 despite any other legal opinion on the matter having been shared with members.

11.   Thus, following the Constitutional Court's 27-07-2018 order and the Supreme Court of Appeals' order of 23-07-2020, a person who is in possession of a firearm of which the white licence has expired, has only two options.

12.   The first is to surrender such firearm with SAPS for destruction, or second, to participate in the new amnesty to again get such firearm licenced under their name

13.   The procedures for Participation in the New Amnesty are as follows:

a.      If you want to hand in a firearm with lapsed white licence for destruction (or a firearm you do not want any more):

ii.   Make sure the SAPS form you receive states that the firearm is surrendered for destruction.

iii.   DO NOT leave the police station without these documents !

iv.   Keep that document very safe as the firearm needs to be taken off your name when the amnesty has passed. Prepare yourself for a long wait for the process to be finalised as all firearms surrendered under the amnesty need to be ballistically tested after the amnesty has run its course.

b.      If you want to apply for a new licence for a firearm with a lapsed white licence, you have until 31 January 2021 to do so under the current amnesty.

i.   Get a gunsmith’s report, which indicates the value of the firearm so that you can prove value if the firearm should get lost after having been handed in with SAPS (state make, calibre and serial number – also take photographs of the firearm).

ii.   Hand in the firearm at any police station under the amnesty and indicate that you will within 14 days submit an application for a new licence for the firearm with your DFO.

iii.    Make sure the SAPS form you receive back states that the firearm is surrendered under the amnesty, NOT FOR DESTRUCTION FOR NEW LICENCE, and that you will apply for a new licence within 14 days after the date of handing in the firearm.

v.   Complete a SAPS 271 form as application for a new licence for the firearm of which the licence had lapsed. Download these forms and complete to apply for new licence:

vi.   Prepare yourself for a long wait for the process to be finalised as all firearms surrendered under the amnesty need to be ballistically tested after the amnesty has run its course.

Being found guilty of being in possession of a firearm of which the white licence has expired (thus an illegal firearm) carries a mandatory minimum sentence of 15 years. 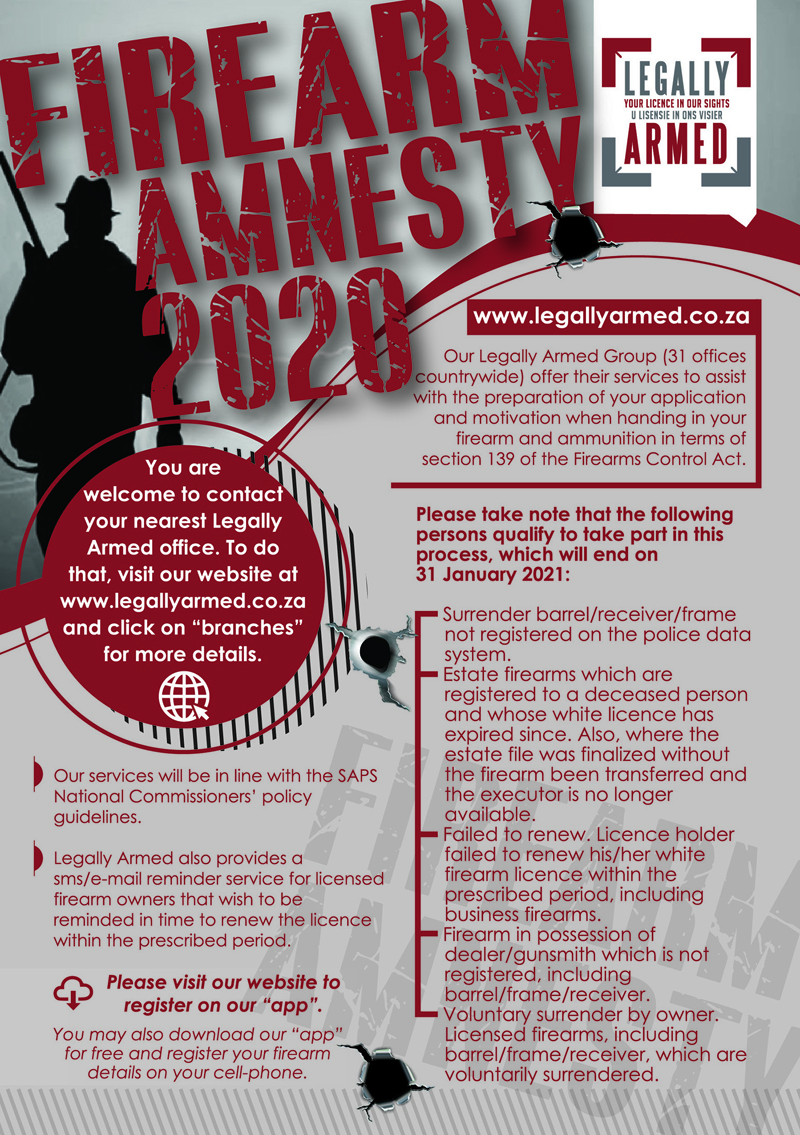